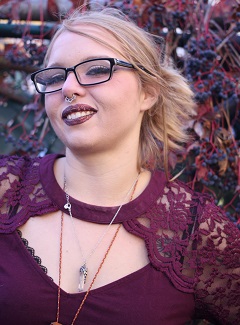 Ursula is a third-generation tarot reader who takes a more academic approach to the tarot. Her reading style is heavily influenced by the archetypal “hero’s journey” narrative.

After a stint in college studying ancient history and languages, Ursula spent a few years traveling, where she gained a lot of tarot experience doing pop-up dollar-a-minute readings on the road.

Her go-to tarot decks are the James Wanless Voyager deck and the Aelister Crowley Thoth deck. Before and after tarot readings, she likes to decompress with a Grateful Dead album and a coloring book.

If you would like to summon her directly, just arrange a few cups of coffee, an irresponsible amount of candy, and/or some fried ravioli into a pentacle and sing “truckin’” over it until she appears. You can, of course, also book readings with her the old-fashioned way; she also offers couples’ readings and lessons.

If you don’t live nearby, you can still get the same great readings from Ursula over the phone or by email. We don’t do per minute over the phone. Instead, we use the same standard lengths as our in-store readings, so there are no surprises in billing.