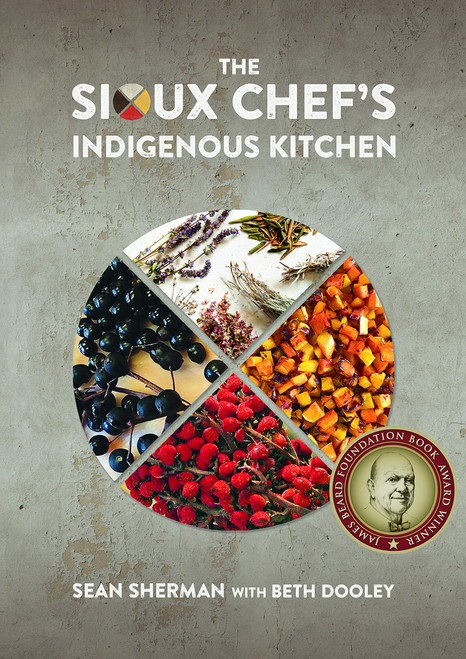 Here is real food—our indigenous American fruits and vegetables, the wild and foraged ingredients, game and fish. Locally sourced, seasonal, “clean” ingredients and nose-to-tail cooking are nothing new to Sean Sherman, the Oglala Lakota chef and founder of The Sioux Chef. In his breakout book, The Sioux Chef’s Indigenous Kitchen, Sherman shares his approach to creating boldly seasoned foods that are vibrant, healthful, at once elegant and easy.

The Sioux Chef’s Indigenous Kitchen is a rich education and a delectable introduction to modern indigenous cuisine of the Dakota and Minnesota territories, with a vision and approach to food that travels well beyond those borders.

"Sean Sherman is doing some of the most important culinary work in America. In The Sioux Chef's Indigenous Kitchen, he takes a forward-thinking approach to indigenous cuisine, bringing his culture into the light to share with the rest of the world."—Sean Brock, James Beard Award Winner, author of Heritage, and Executive Chef Husk, Charleston, SC

"I am impressed by Chef Sean Sherman’s dedication to a cuisine that has long been lost: his respect for his heritage and his passion to bring the beauty of this tradition into the world. This is remarkable work and I look forward to learning from this talented chef!"—Maneet Chauhan, Food Network Celebrity Chef, Founder & CEO, Indie Culinaire

"The Sioux Chef provides food for thought as well as for the body. The recipes will teach cooks everywhere how to pay attention to the world around them for sources of ingredients and how to prepare those ingredients. The personal stories—the wisdom they share—will teach all readers about sustainable living—the interdependence of beings, living with the earth instead of on the earth."—Indian Country Today

Chef Sean Sherman was born in Pine Ridge, South Dakota, and has been cooking in Minnesota, South Dakota, and Montana for the past twenty-seven years. He works as a caterer and food educator across the country through his business The Sioux Chef, based in South Minneapolis. He has earned plaudits and profiles in such venues as National Public Radio, Guardian UK, Saveur, and the New York Times.

Beth Dooley is author of many award-winning cookbooks, including Savory Sweet: Simple Preserves from a Northern Kitchen, Minnesota’s Bounty: The Farmers Market Cookbook, and The Birchwood Cafe Cookbook, all published by the University of Minnesota Press. She has also written a memoir, In Winter’s Kitchen: Growing Roots and Breaking Bread in the Northern Heartland.

We Reiki bless every hand crafted Spiritual Oil we make and charge on our altar. Each of our gift sets work on the principal of the Power of Three, and include three 5 ml bottles of our select...

We Reiki bless every hand crafted Spiritual Oil we make and charge on our altar. Each of our gift sets work on the principal of the Power of Three, and include three 5 ml bottles of our select...

Earth Medicine: Ancestor's Ways of Harmony for Many Moons by Jamie Sams

The true spirit of Native American ways of knowing shines through in these heartfelt meditations, poems, and stories. In 364 daily offerings organised according to the cycles of the moon, Jamie Sams...

The Wood Witch of Greenwood cloaks herself in leaf and branch and is unknown to most mortals by choice. Her wand is a mystery, but those worthy of initiation will find within them Magical Knowledge...

In this 78-card deck the 22 Major Arcana, referred to as the Great Mystery, depict a path of life, starting from the Seed/Fool card and completing with the Dancer/World card. In the Minor Arcana the...