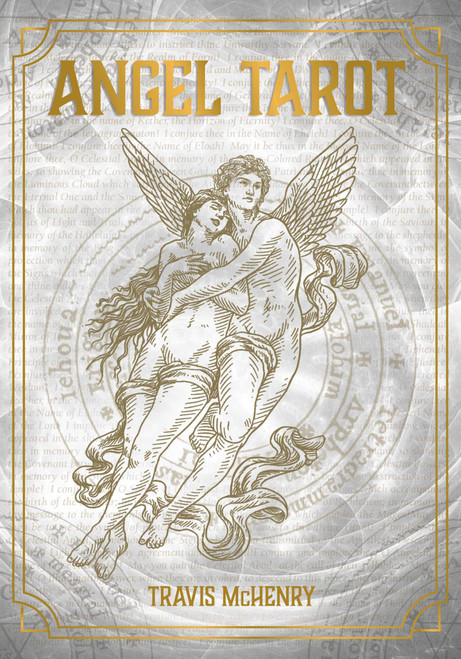 The Angel Tarot is nothing like a traditional deck of angel cards. The 72 angels of the Kabbalah (or Shem HaMephorash) are extremely powerful heavenly beings that provide assistance to mortals while also ruling over their hellish counterparts, the 72 demons of the Goetia. This deck serves as an excellent companion deck to the Occult Tarot.

When summoning an angel, their sigil (a kind of esoteric calling card) is supposed to be drawn on a piece of pure virgin parchment in red ink. To echo this color palette, the cards are made to look like fresh, pure parchment.

The magical symbols are real.
The artwork is hauntingly divine.
These aren't your Aunt Doreen's angel cards . . .

Go beyond the traditional angel tarot decks with this set of 72 angels of the Kabbalah (or Shem HaMephorash) cards.

According to the secret doctrine of Cornelius Agrippa, every mortal born on earth has three guardian angels. Agrippa’s occult philosophy is rooted in the sacred Kabbalah, or secret tradition of Israel, which postulates that the powers of the 72 angels of the Shem HaMephorash are distributed throughout the times, days and seasons.

Your first angelic guide is of divine rank and order. It is commissioned by the command of God, and the charge of the soul is given to this angel at the time of the soul’s creation.

Your second angelic guide emanates from the astrological world, from the power of the stars. It will lead mortals along the path of virtue, and its influence is on the qualities of the moral order and the things that pass into expression in speech.

Your third angelic guide emanates from the physical world. It governs the physical aspect of a mortal’s existence on earth and influences health, motions and actions.

There are three ways to utilise The Angel-evoking Tarot: evocation, meditation and divination.

Begin by thinking of a request you wish to make of the angelic spirits, then select the card of the angel you wish to invoke. Place it on the table, altar or ground in front of you.

Prepare your space by lighting incense or using any cleansing rituals you would normally perform.

Read aloud the evocation to summon the angelic spirits.

If you wish to have a particular angel’s presence around you but do not wish to undertake the full evocation ritual, you may select that angel’s card and place it on the table or floor in front of you. Light two, four or six candles and silently meditate on the angel’s nature and abilities.

There are three divination techniques suggested here; however, each tarot reader is encouraged to use any technique that suits their particular style of reading. These methods may be used to read for yourself or for someone else.

A renowned modern occultist, Travis McHenry is a native of rural Pennsylvania and grew up surrounded by the folklore of the Appalachian Mountains. He began studying the dark arts in the late 1990s when he stumbled upon a secretive coven of witches who subsequently befriended him and allowed him to publish the first written history of their magical tradition. Travis has been a student of many religions, including Buddhism, Jainism, Hinduism, and the Greek Pantheon, and was an ordained deacon in the Baptist Church. In addition, from 2001 to 2008 Travis served as an intelligence specialist in the United States Navy. He is also the creator of Occult Tarot and Angel Tarot.
×

The universal symbols of relationships—a man and a woman united as a couple and the eternal yin and yang—are substituted here by archetypes that define male homosexual union. A brilliant...

Designed by well-known reader and tarot YouTube star Gregory Scott, this deck draws forth a unique sense of positive clarity in the reader. With these cards, you will discover a modern sensibility...

Saturday, December 11, 2021908 W Lake Street, Minneapolis, MN 55408Even if you're the most mild-mannered practitioner who sticks to personal development magick, you can still end up getting...

December 5th (Sunday) 1:00-3:00pmNOW IN PERSON! Calling all Astrology enthusiasts and explorers! Come to The Eye on the 1st Sunday of each month for a Chart Clinic with other budding and experienced...

Using Tarot, Zack helps you find the answers to your questions, conceive of your next steps, and discover your place in the world. Through years of working with the Thoth Tarot as an Intuitive...

This kit is all you need to help with drawing down the powers of the new moon. Each kit has been assembled with the aim to provide you the tools to start working your own mojo quickly. This New Moon...

The iridescent sheen of a raven's wing reveals a tantalizing glimpse of the future. A tattooed hand, sinews roiling like ley lines, peels back the gossamer veil that separates this world from the...

The Rider Waite Smith tarot deck, originally published in 1910, was illustrated by Pamela Colman-Smith. Although she is quoted as saying the project was "a very big job for very little cash," in the...

The Prisma Visions Tarot deck is a unique artisan deck by illustrator James R. Eads. This deck is absolutely unique, each suit of cards can be laid side by side to form a single illustration. But...